What impact will energy data for 110 million homes have on the energy efficiency industry?

For more than a decade studies have consistently shown that homebuyers want energy efficient features, but few are actually aware of the impact those features have on energy cost. The average U.S. homeowner spends more on energy than property taxes and insurance, but energy is the only one of those three common expenses not considered in the mortgage process. The recent announcement and report released by the Rocky Mountain Institute (RMI) that real estate platforms have started including energy information in their listings is a significant step toward reducing the barrier to transparency of energy use in the home buying process. This transparency is also likely to spur energy efficiency improvements which is good news for utility efficiency programs, contractors and HERS Raters.

RMI announced that realestate.com is working with UtilityScore to provide a score and estimated energy costs for homes listed on its site.  Meanwhile Redfin, one of the top ten real estate platforms, is working with Tendril to provide an Energy Score for all homes on its platform,  not just those listed for sale. RMI estimates that 110 million homes are now covered on these two platforms.

We can look to the commercial building sector to see evidence of the impact that energy use transparency has on energy use. Studies have shown that in cities with benchmarking and transparency laws, where building owners are required to disclose their energy consumption, energy use in those buildings has decreased between two and nine percent in just three years. The impact of transparency on energy use can drive energy reductions, especially when it’s actual energy use. However, the energy scores and estimated costs that Tendril and UtilityScore provide for real estate listings are based on estimates that use the following variables:

Although there can be discrepancies in how the estimated energy costs compare to actual costs; homeowners can claim their home on these platforms and adjust for any facts that are incorrect or to account for energy efficiency upgrades and their score will update accordingly.

The Good, The Bad and The Confusing

It’s obvious that transparency is a good thing when it leads to competition for improving the energy efficiency of homes. Giving potential homebuyers a rough estimate of the energy use of a home provides an excellent platform for incorporating energy use in home buying decisions. However, this doesn’t mean that energy consumption will get factored into the mortgage underwriting or appraisal process; which is the ultimate goal in order to provide value for energy efficiency. Unfortunately, the rough estimates provided by Tendril and UtilityScore are not robust enough for lenders or appraisers to use in their decision making.

For more than two decades, the Residential Energy Services Network (RESNET) has championed that energy efficiency be valued in the real estate transaction process as part of our Home Energy Rating System (HERS). In fact, one study showed that homes with lower HERS Index scores had a 32% lower mortgage default rate. In the past 10 years, more than 2 million homes have been HERS Rated.  The HERS Index is based on a scale of 0-100, where lower is more efficient. A home that scores a zero is considered a net-zero energy home. Unfortunately, the energy scores produced by UtilityScore and Tendril use a 0-100 score where 100 is more efficient.

This inverted scale will lead to significant market confusion, which is unfortunate because HERS Rated homes are verified by an independent, certified HERS Rater through both energy modeling as well as on-site inspection and testing. In addition, RESNET is launching a new Appraiser Portal, before the end of the year, that will allow appraisers to verify the HERS Index score of a home, view its estimated energy costs and compare that home to other nearby HERS Rated homes. This new portal, developed in collaboration with the Appraisal Institute (the largest not-for-profit real estate appraisal organization in the United States with nearly nineteen thousand (19,000) professionals) is expected to greatly improve appraiser access to important energy cost information of homes. Similarly, as it will do with homebuyers, having an inverted scale will create confusion among appraisers as well.  The two graphics below show the difference between an Energy Score listed on Redfin and the HERS Index.

What’s the Difference Between HERS Index Estimates and Energy Score Estimates?

To get an idea for the differences between the estimated energy costs in Tendril’s Energy Score and RESNET’s HERS Index, I conducted a very rough comparison between 12 homes that have both a confirmed HERS Rating, and an Energy Score listed on Redfin. These 12 homes were located in 10 geographically disperse states.  Here is a chart of the results: 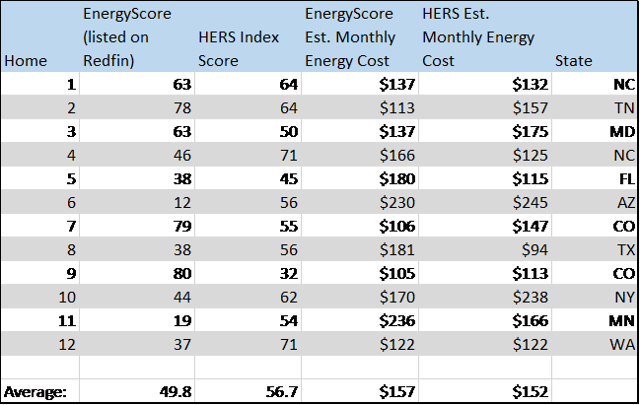 Providing energy use estimates in real estate listings is sure to drive reductions in energy use which is good news for the residential energy efficiency industry. It is also this industry that will be burdened with educating consumers and others involved with real estate transactions about the differences between an independently verified energy label, like the HERS Index Score and a remote estimate, like Energy Score. Better collaboration among energy data providers could help improve the accuracy of energy cost estimates. 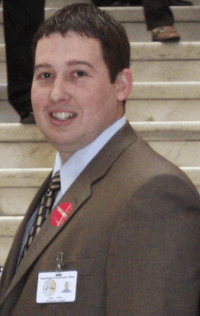 Ryan Meres is RESNET Program Director. Ryan has 10 years of experience in energy efficiency, energy policy and building energy codes and has published more than two dozen case studies, reports and resources on those topics. He spent nearly six years at the Institute for Market Transformation (IMT) where he led energy code development, adoption and compliance efforts at the city, state and national levels. Prior to joining IMT, Mr. Meres was an ICC Fellow at the U.S. Department of Energy, Building Energy Codes Program. He also worked at the Georgia Department of Community Affairs (DCA) as a Building Codes Consultant where he led the adoption and implementation of statewide energy and green building codes.

Ryan successfully completed a HERS class in 2007 and served as an EarthCraft House Technical Advisor at the Southface Energy Institute, conducting insulation and air sealing inspections, and building envelope and duct leakage testing for builders. He is a LEED Accredited Professional, an ICC Certified Residential Energy Inspector/Plans Examiner and holds a Bachelor’s Degree in Architecture from the Savannah College of Art and Design.