Straw Bale Construction is a pioneer technique created out of need by settlers in the Sandhills region of Nebraska, who were faced with few trees for timber and soil too sandy to make sod huts. They creatively used the prairie grass bales and built shelters from them, treating the bales like large bricks. Some used clay plaster to stop the wind from moving through the bales and a construction revolution was born. Some of these structures are still standing, over 100 years later. 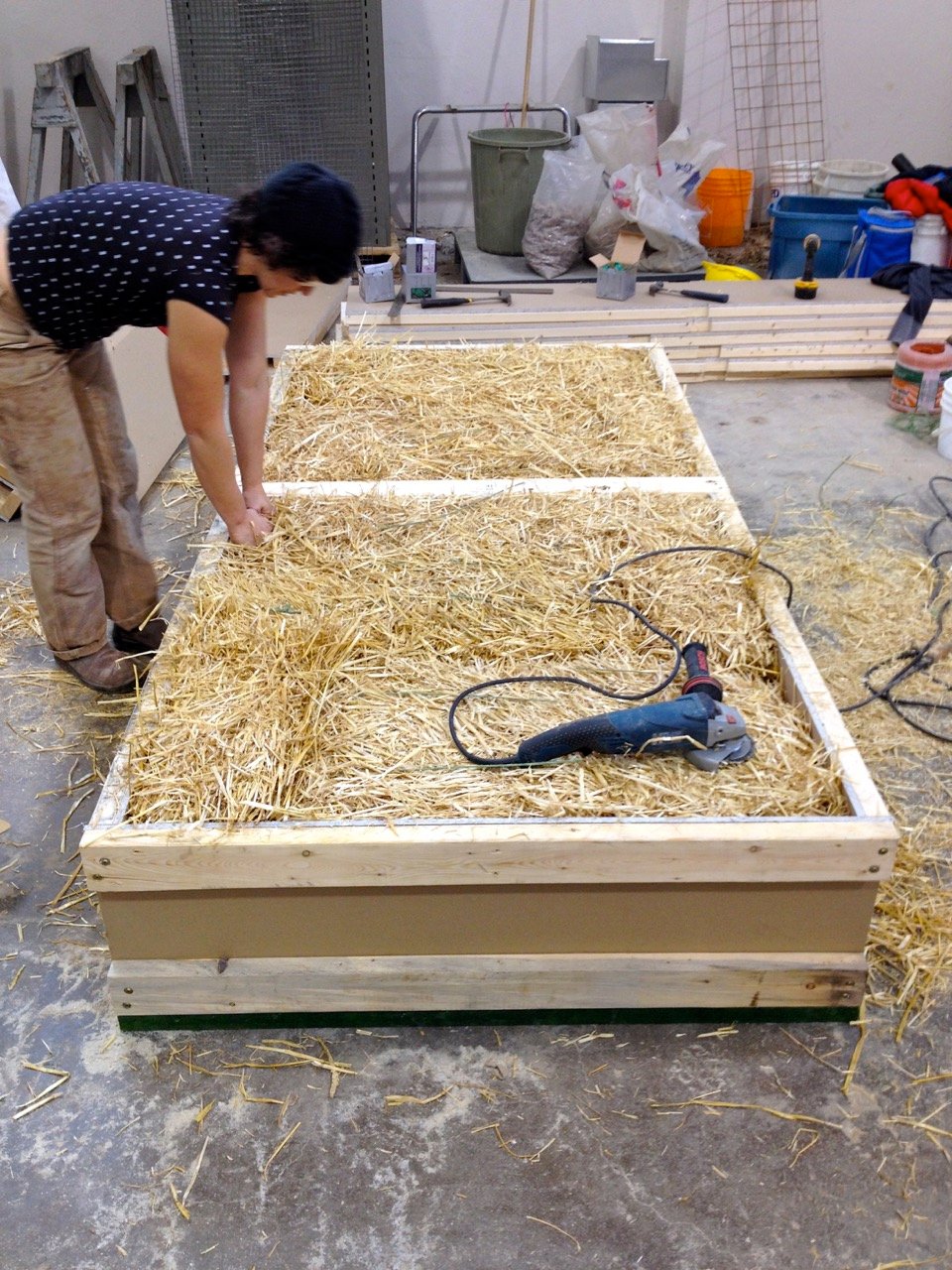 Modern straw bale practitioners developed this early idea into a more streamlined and code-compliant building system, but the premise remained the same: stack up bales like bricks and apply a plaster coating to the inside and outside face of the wall.

Some bale builders, myself included, began working with the idea of prefabricated straw bale walls, building them off-site and bringing them on site already plastered. The construction process for my first set of panels was an exact replication of the on-site process, with the bales stacked inside a frame and plastered vertically. There were some efficiencies gained with this process, most notably control over weather when building indoors.

A big step forward came with the realization that we could build the panels lying horizontally. Suddenly, the process of plastering – which is always the most labor-intensive element of straw bale building – was changed from a multi-coat application that involved a reasonable amount of skill to a single-coat “pour” into a frame. The panels were perfectly square and plumb in a fraction of the time, with better and more reliable results. Real efficiency was gained.

It took over 10 years of making panels in this form before the next big development. This time, it took questioning the assumption that straw bale walls need to be plastered. Even when plastered horizontally, this process is still the most time-consuming and messy, and makes for panels that are very heavy to move, transport and install. Could the panels be “coated” in a material that was not plaster?

Bale builders have long known that the walls require a permeable skin on the inside and outside face to allow moisture to diffuse through the wall and maintain appropriate moisture equilibrium in the system. Natural plasters have been an ideal means to provide structural performance, weather protection, air tightness, and fire resistance while remaining moisture permeable. What other material could potentially provide all of these functions?

Wood fiber panels have been making big inroads in energy efficient construction in Europe, with thick (1-4 inch) panels being used in frame construction to provide thermal performance with air tightness and racking strength. The idea struck me: could these panels replace the plaster skins on straw bale SIPs? After some initial prototypes and preliminary testing, the answer seems to be “yes.” In compression testing, straw bale panels with 1.5-inch thick wood fiber panels from MSL Fiberboard in Quebec far exceeded code requirements. More testing will reveal the capabilities of these panels for racking strength and fire protection.

A final benefit comes when considering the carbon footprint of the walls. The plaster skins are the only element of a straw bale SIP that has a positive carbon footprint, with cement-based plasters adding a significant carbon footprint.The advantages of replacing plaster with wood fiber panels are many. The weight reduction means that a 4x8 foot panel can be lifted and moved by two people, rather than requiring a boom truck or forklift. The assembly process is much faster: two people we able to assemble six test panels in under two hours, where plastered panels of the same size would have taken around eight hours. There is no curing time required either, so the panels can be moved immediately upon construction. Another benefit is the addition of an extra R-8 to the thermal value of the wall (R-4 for each panel), raising the full value of the wall to R-36 and reducing any thermal bridging around the frame. With a permeability of 26 US perms, the fiber board outperforms any type of plaster skin.

Wood fiber panels sequester carbon (as does the straw and the wood frame), resulting in a building element that sequesters more carbon than is emitted during its construction. Wood fiber panels do require the builder to install some form of exterior cladding and interior finish to the panels. However, the need for cladding and an interior finish is common to all forms of conventional construction, so it’s hardly a barrier to the adoption of dry straw bale SIPs.

This form of straw bale SIP could prove to be an effective means of incorporating high levels of affordable energy efficiency while dramatically lowering the carbon footprint and labor input, all important aspects in modern construction.