Do LED Lights Save Energy?

THE INCANDESCENT LIGHT BULB – the one we all know – is slowly being replaced by new technology. A typical light bulb uses electricity to heat a filament wire to a high temperature to produce a glow. It is highly effective but at the same time how often do you change a bulb in a well-used room in an average year? Let’s face it, incandescent bulbs are not made to last.

There has been an effort to reduce or eliminate these old style bulbs recently, most notably in favor of 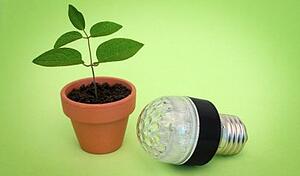 compact fluorescent light bulbs (CFLs) that are longer lasting and use less energy. Consumer reaction to these bulbs has been very positive, but now there’s an even more energy efficient lighting option that is generating tremendous interest. Solid-state lighting (SSL), which uses semiconductor Light-Emitting Diodes (LEDs) as sources of illumination has arrived on the scene, and make no mistake – it’s here to stay!

LED lights are quickly becoming a new standard in lighting technology. You’ve probably already seen flashlights and garden lights that use LEDs to produce a bright and strong light. Now these lights are being produced for home lighting and have many advantages over old style light bulbs. Saving energy is the hallmark of LED lighting. It costs a fraction of what it takes to power a standard bulb and the light produced is a result of higher efficiency. You actually get the same amount of light with less electricity used. There are a variety of styles now on the market for different applications around the home.

Bulb replacements for lamp fixtures with a screw-on base are now available and they last around 25 times longer than a normal household 60-watt bulb. That means you’re saving money on both your electricity bill and the cost of bulb replacement. There are other advantages to LED lighting. For example, LED lighting is solid state, meaning it is more resistant to shocks and vibrations as compared to conventional light bulbs.

The energy savings available with LED lighting is quickly being noticed and some cities are even starting to experiment with LED powered street lights as a way to reduce power consumption. A change in the way you light your house could provide you with long-term power savings.

This content was originally published by the Residential Energy Services Network (RESNET) here. This content has been republished with the permission of RESNET. RESNET is the independent, national nonprofit organization that homeowners trust to improve home energy efficiency and realize substantial savings on their utility bills. RESNET’s industry-leading standards are recognized by the U.S. Department of Energy and the U.S. Environmental Protection Agency, among others.

Ryan Meres is RESNET Program Director. Ryan has 10 years of experience in energy efficiency, energy policy and building energy codes and has published more than two dozen case studies, reports and resources on those topics. He spent nearly six years at the Institute for Market Transformation (IMT) where he led energy code development, adoption and compliance efforts at the city, state and national levels. Prior to joining IMT, Mr. Meres was an ICC Fellow at the U.S. Department of Energy, Building Energy Codes Program. He also worked at the Georgia Department of Community Affairs (DCA) as a Building Codes Consultant where he led the adoption and implementation of statewide energy and green building codes. Ryan successfully completed a HERS class in 2007 and served as an EarthCraft House Technical Advisor at the Southface Energy Institute, conducting insulation and air sealing inspections, and building envelope and duct leakage testing for builders. He is a LEED Accredited Professional, an ICC Certified Residential Energy Inspector/Plans Examiner and holds a Bachelor’s Degree in Architecture from the Savannah College of Art and Design.