Construction Technology: The Tools of the Trade 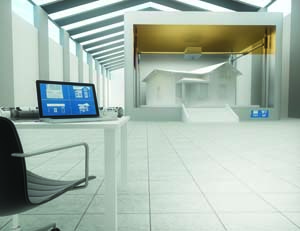 THE CONSTRUCTION INDUSTRY is responsible for five percent of the GDP—but also for 38 percent of the country’s carbon emissions. The industry also loses $120 billion annually due to labor inefficiencies, miscommunication and wasted materials. Yet among construction professionals, the adoption rate of new technologies that can seriously help eliminate such issues is surprisingly slow.

What’s not surprising are the real concerns that cause builders and developers to hesitate: budget restrictions, employee training and even the distant (or not so distant) fear that robots will steal jobs from human workers.

At the moment, much of the powerful and innovative construction technology has been implemented largely by the commercial sector. But as residential construction heads toward multi-family and urban projects, that distinction is becoming blurred.

The good news is that autonomous robots aren’t taking over jobs anytime soon. As Harvard research scientist Justin Werfel points out, robots are specifically created for the three Ds of construction work: Dangerous, Dirty and Dull. Swarming Soon. Social termites provided the inspiration for the design of TERMES, a swarm construction system in which many autonomous robots cooperatively build large-scale structures. The TERMES project is funded by the Harvard University’s Wyss Institute for Biologically Inspired Engineering. 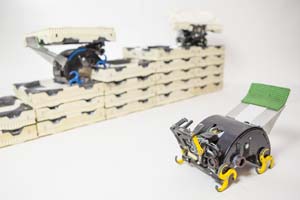 Social termites provided the inspiration for the design of TERMES, a swarm construction system in which many autonomous robots cooperatively build large-scale structures. The TERMES project is funded by the Harvard University’s Wyss Institute for Biologically Inspired Engineering.

Werfel, who is part of a team that recently published work on termites-inspired swarm robots (TERMES), believes that when robots are fully adopted into construction, which may be decades from now, their first job site may be on the moon. The TERMES robots, however, would not be as efficient as human workers when it comes to the construction of buildings on Earth. Instead, robots make more sense in precision tasks or jobs that would be unsafe for human workers.

The Robots of Today
One example of a robotic system that isn’t so far away is known as SAM (Semi-Automated Masonry), which has been designed for bricklaying work. Currently being tested by its developers, New York-based Construction Robotics, the company is planning a commercial release of SAM in 2015. The 1,500-pound machine, which has to be operated by one mason, can lay up to 3,000 bricks in a day, which is about four or five times the ability of a human worker. 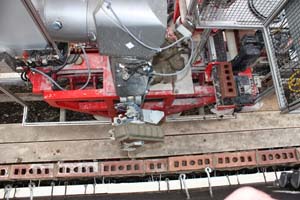 Construction Robotics was established in 2007, with the goal of developing a semi-automated bricklaying system with the potential to revolutionize the masonry industry. The human mason works alongside SAM, the Semi-Automated Mason, making sure bricks are placed correctly, and removing excess mortar. The company estimates SAM could potentially cut construction costs by 30 percent, but will SAM also cut jobs?
Credit: Construction Robotics

And in Birmingham, Alabama, a hazardous job has been assigned to a robot crawler on an existing building, where construction firm Brasfield & Gorrie used it to preliminarily inspect a portion of the exterior skin, eliminating the need for manual inspection by a human worker. The firm teamed up with Pitts Media, a local multimedia production company, to devise the robot crawler: essentially, a camera attached to wires that enable it to crawl up and down the building exterior.

The robot crawler was designed as part of the firm’s study of unmanned aerial vehicles (UAVs). With the assistance of a grant, Senior Project Manager Susan Stabler teamed up with Auburn University’s Professor Paul Holley to study the viability of drone usage in construction on the firm’s one-million-square-foot Grandview Medical Center project. The study is in partnership with Leica and Aibotix.

“Once video of the skin is captured by the drones, our Building Information Modeling (BIM) department will input the images into our 3D model for easy review,” Stabler explains.

A secondary use of the drones has been to capture aerial job site imagery of progress on the adjacent parking garage under construction. Under current FAA regulations, which may change in a year’s time, drones for building work are not completely legal, with the issue of privacy and spying as key concerns. But Stabler says the firm is trying to stay on the forefront of this trend.

“The possibilities are endless. Drones would not only allow you to complete tasks like inspections much more quickly, safely and cost effectively, but they could also be used in conjunction with other programs to generate accurate 3D models for use prior to, during and even after construction,” she says.

To further improve efficiency and reduce paper consumption to almost zero, the project—aiming for Green Globe certification—is supported by the use of 200 iPads (team members use PlanGrid and BIM 360 Glue apps for paperless project delivery and ensuring safety measures), Apple TVs, digital plan tables and a dustproof, weatherproof, self-healing Wi-Fi network to connect them all. The savings, in both materials and cost, are profound.

“When the project was halted in 2003, the team had spent nearly $1 million printing blueprints. Today, the team expects to spend less than $75,000 on technology and printing combined,” Stabler says.

What is 3D Printing? Also called Additive Manufacturing, 3D printing creates three-dimensional objects from digital files by adding material, layer by layer. Software breaks down a CAD or other model into multiple super-thin horizontal layers. The printer extrudes material through a nozzle, using liquid material which is later cured, or by heating or melting material to produce a seamless integration of layers. Many different materials can be 3D printed, including plastics, glass, concrete, metal and organic matter—even human tissue.

The Promise of 3D Printing
While construction firms are steering away from printing blueprints, printing houses is a concept that’s becoming concrete reality—literally. 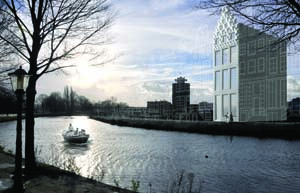 As Werfel puts it, “Automation has taken a hold in manufacturing because that is what society decided it wants.” The era of the 3D printer has been hurriedly ushered in worldwide, and small concrete houses are already being churned out (some faster than others) in places as far apart as Minnesota, China and the Netherlands. Chinese company Win Sun recently “printed” a series of 10 concrete houses, made from construction waste mixed with cement. The components were printed separately and assembled on-site in less than 24 hours, and the houses cost less than $5,000 each. BetAbram, a company in Slovenia, claims it will be the first to sell 3D house printers by summer this year, with prices starting at around $16,000. And in Amsterdam, an international team is collaborating on the 3D Print Canal House utilizing “bioplastics,” right on one of the city’s famous waterways. There is currently no building code in place for 3D-printed construction, but the technology, once refined, could offer a cheaper, highly customizable, rapidly assembled (and possibly recyclable) zero-waste product.

The Road to Augmented Reality
But forget about self-made houses and robots that crawl or fly—many builders and developers are still coming to terms with the technology that’s already right at their fingertips.

Aside from dealing with the learning curve, builders need to be certain of the ROI from any tech tools, especially smaller firms like Arizona-based Pepper Viner, a builder of sustainable homes with 19 employees.

“It takes research on the homebuilder’s part to determine what hardware or software can be beneficial. After coming through the last few years, I don’t see us investing in additional hardware until the second quarter of 2015. I believe more information should be readily available to us so that we can make sound decisions,” says Chad Williams, Pepper Viner’s director of operations.

Still, moving toward a paperless system is the firm’s eventual goal. While field personnel currently use smartphones on the job site to take photos of any issues, Williams says the firm seeks to purchase iPads in the future and is in the process of converting to cloud-based software called BuildLinks.

What is BIM? Building Information Modeling is a dynamic, comprehensive data set that includes both the functional and physical characteristics of a building. More process than model, BIM essentially creates a virtual simulation of a building that allows multiple users to use, change, interpret and add to it—minimizing waste, facilitating change orders and encouraging communication among all stakeholders. Some call BIM 4D modeling, since it includes the dimension of time; the process can accommodate the entire life cycle of a building, from design and construction to management and demolition. ArchiCAD and Autodesk are two software programs that support BIM.

Even as advances in graphic modeling and 3D laser scanning have firmly entrenched the growth of Building Information Modeling, or BIM, some in the industry point to augmented reality and/or virtual reality as a more comfortable and less technically complicated next step to enhance the accurate communication of ideas in the office and on the job site. As Paul Doherty, CEO of the digit group, inc., simply puts it: 2D is always an interpretation.

Augmented reality is already, well, a reality. It was used in the construction of a new Kaiser Permanente facility, the Oakland Medical Center, when Quick Response, or QR codes were placed on doors and walls throughout the project. This allowed any field personnel with a mobile device to point, scan and access—in an X-ray vision type of way—an updated, as-built 3D laser scan or 3D BIM model of specific segments of building infrastructure. The scan displays an augmented reality by overlaying construction plans and other information on top of the current view. 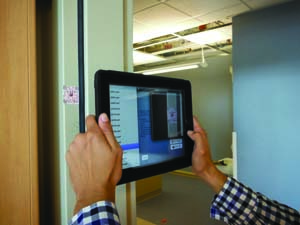 McCarthy Building Companies field-tested a new application in its Kaiser Permanente facility in Oakland. Every room in the hospital includes a QR code; when scanned, BIM models of the room’s infrastructure appear on the user’s iPad.

So where are all of these diverse technological aspirations leading? Toward integration, experts say. The urgent need for clear and efficient collaboration is the reason behind organizations like the recently formed Construction Open Software Alliance (COSA), whose 16 software developer members hope to promote an open source philosophy and create a standardized exchange of data across all software platforms utilized in the construction industry. COSA’s members include construction software companies such as SmartBidNet, Online Plan Service and Sigma Estimates. According to the organization’s blog, COSA hopes to add end users—general contracting companies—to its membership this year, who will act as advisors and a built-in “test group.”

The future of construction lies not only in integration of software, but also in the integration of separate individuals, firms and agencies, meaning collaboration across various geographic locations—all of which points to a more user-oriented industry.

Opting into this trend is the International Code Council (ICC), which launched the online portal and app cdpACCESS in late 2013. The cloud-based system allows for ICC’s 58,000 members to create, view and collaborate (and vote, if eligible) on code change proposals and comments.

Virtual reality, then, seems like a natural next step for the job site that will offer true integration. But by that time, we may be testing advanced tools on other planets—and there, the robots will be inescapable.