Climate Change: the Greatest Opportunity to Come to the United States

Climate Change is the greatest economic opportunity to come to the United States in a hundred years. But, turning this planetary threat into our children’s great opportunity, will not happen by itself. We must make it happen.

There is no single public work more important to the security and well-being of our children’s future than moving our nation forward to a 100% Renewable Energy Grid by 2050.

We are Americans. We are the masters of history, not its victims. We make our own events, not time or chance. As earlier generations of Americans faced and defeated the Nazi threat of fascism, so too must we face and defeat the threat of Climate Change. As earlier generations built the national transportation and energy grids necessary to win prior industrial revolutions, we must build the national grids necessary to win this Third Industrial Revolution.

And the good news is, seizing this opportunity no longer requires dreaming or hoping for magic solutions, it merely requires doing. The technology and know-how already exist. No other country on the planet has a greater abundance of natural renewable resources — sun, wind, and water — than does the continental United States. And the cost for our nation to move to a 100% Renewable Energy Grid is far, far less than the cost of just the most recent tax cuts for the super-wealthy among us

With the possible exception of Communist China, no nation has the ability to move forward to a renewable energy future as quickly as we do. Chinese Policy dictators understand clearly the competitive economic advantage of lifting the costs of fossil fuel extraction and fossil fuel burning from its national shoulders 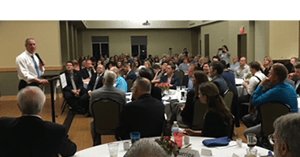 Here in the United States, the barrier to our own progress-at-scale is not a lack of money or too much political freedom. Nor is it a lack of technical know-how or ability. It is the lack of political will. A lack of political will perpetuated by a lack of understanding. It is fear itself. For in the absence of a will to move forward, the inertia of old money blocks our path with the fear of loss.

As Sinclair Lewis once wrote, “it’s hard to convince a man of the truth when his job depends on not believing it.”

Our domestic fossil-fuel industry — oil, gas, and coal — take our tax-payer subsidies and use a big chunk of it to convince us and our elected representatives that any switch to renewable energy will cost all of us dearly in terms of money and jobs. The truth, however, tells a different story.

It is cheaper today to build new solar or wind-powered electricity generation than it is to maintain existing coal or nuclear-powered plants. And unlike those who extract and burn fossil fuels to generate our electricity, the sun and the wind will never send us a bill.

There are more jobs in a Renewable Energy future, not less. More jobs, less pollution.

Already today, there are more people employed in solar energy than there are in oil and gas extraction.

There are more people employed today in solar energy than there are in coal extraction.

In fact, in the United States today, there are more people employed at Arby’s than there are in coal extraction. Nostalgia’s not what it used to be and neither are the jobs in fossil-fuel extraction.

Add wind power jobs and other advanced energy jobs into the mix and the evidence is irrefutable.

Make no mistake about it — as coal and oil were the new fuels of prior industrial revolutions, Renewable Energy is the new fuel of this Third Industrial Revolution.

This is not to say that we can be uncaring about the challenges of job-shifting that come about with every Industrial Revolution. Nor can we be cavalier about managing the significant financial challenge of stranded costs on the ledger sheets of big American corporations and pension funds.

These are political problems. These are tax and debt-restructuring problems. But these are not reasons to pretend the Polar ice caps are not melting or that change isn’t happening. The world only spins forward. There are far greater opportunities ahead of us than behind us.

With commodity fuel costs (coal, gas, oil) removed from the electricity production equation, there will be more jobs at better pay in the renewable energy jobs of the future than there are to be saved in the fossil fuel jobs of our past. Indeed, there already are.

So, let us stop subsidizing what we know to be obsolete, expensive, and damaging to our well-being. And let us instead encourage — and where necessary — subsidize the switch to renewable energy until it fulfills 100% of America’s electricity demands by 2050.

This is not something we do for polar bears or even the rest of the world, this is something we can and must do “for ourselves and our posterity” as Americans.

Our own U.S. Renewable Energy Lab in Golden, Colorado has run the computer simulation models. A 100% Renewable Energy Grid is possible, and what’s more, it is less expensive than burning fossil fuels or maintaining old nuclear plants. Challenges of cost have already been addressed by advances in solar and wind technology. Challenges of storage and intermittency are being addressed by rapid advances in battery technology. The capacity for storage will soon be distributed to every home as electric cars replace cars powered by combustion engines, and car companies will soon begin to offer “electric battery storage as service” in every home in America.

The future we seek for our children is not a future of less, it is a future of more. More security, greater health, greater opportunity, and greater well-being.

But if responsibility is truly the greatest of freedom’s privileges, together we must choose.

We have before — many times. We must again.

This blog was republished with the permission of the author and was originally published here as part of the This, We Believe series.