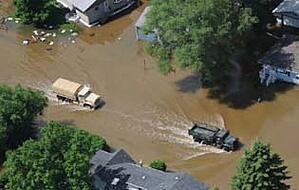 For many years, the Pentagon has issued reports about climate change, highlighting the future possible threats our nation may face from increased temperatures, extreme weather, drought, flooding, and rising sea levels. This week marked a notable change in the Pentagon’s approach—instead of addressing climate change as a distant danger, the Pentagon issued a report that clearly recognizes it as present-day threat to national and global security, requiring immediate and drastic action.

Previously, the military has focused the bulk of its climate action efforts on preparing military installations for climate change. Military bases have suffered their share of climate disaster, such as the repeated flooding of military installation in Virginia caused by rising sea levels, and the organization has responded accordingly to protect its facilities and infrastructure.

But the Defense Department is now broadening the scope of its climate efforts. In this week’s report, Defense Secretary Chuck Hagel stated:

Among the future trends that will impact our national security is climate change. Rising global temperatures, changing precipitation patterns, climbing sea levels, and more extreme weather events will intensify the challenges of global instability, hunger, poverty, and conflict. They will likely lead to food and water shortages, pandemic disease, disputes over refugees and resources, and destruction by natural disasters in regions across the globe.
In our defense strategy, we refer to climate change as a “threat multiplier” because it has the potential to exacerbate many of the challenges we are dealing with today – from infectious disease to terrorism. We are already beginning to see some of these impacts.

“The loss of glaciers will strain water supplies in several areas of our hemisphere,” said Hagel on Monday at a meeting of defense ministers in Peru. “Destruction and devastation from hurricanes can sow the seeds for instability. Droughts and crop failures can leave millions of people without any lifeline, and trigger waves of mass migration.”

The US military is particularly concerned about how drought and food shortages will affect high risk areas, namely the Middle East and Africa. Military experts have even made a connection between the increased level of desperation caused by lack of access to food and clean water and the rise of extremist groups like ISIS, which are now taking control of precious (and scarce) water resources to further enhance their tyrannical power.

Beyond preparing for the inevitable increase in national security threats caused by climate related events, the Pentagon plans to play a principal role in helping the United Nations develop and implement a global response plan. The Defense Department expects to be part of the vanguard at the United Nations meetings in Peru in December, taking a lead in the ratification of a global climate action treaty.

Interestingly, the Pentagon’s climate efforts are being championed by Hagel himself, who has a sordid past when it comes to climate action. As a Republican Senator from Nebraska, Nagel blocked the US from participating in the Kyoto Protocol. Hagel’s shift apparently stems from his direct experience in dealing with a bevy of climate-caused natural disasters, his open acknowledgement of increased international risks caused by our changing climate, and his newfound understanding that switching to a clean, low-carbon economy will actually have financial and environmental benefits.

Fortunately, Hagel’s—and the Pentagon’s—proactive involvement in scenario planning is elevating the discussion of climate action above political debate and into reality.