FOR YEARS, CLIMATE SCIENTISTS have warned us that if the concentration of carbon dioxide, a harmful heat-trapping greenhouse gas, exceeds 400 parts per million (PPM) for a sustained period of time, we will likely face a vicious cycle of deteriorating climatic conditions leading to even more extreme global temperatures, greater weather instability, rising sea levels and other nature-based calamities. 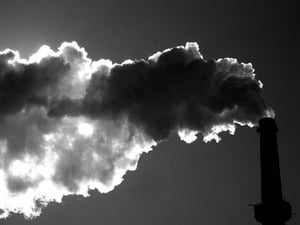 Well folks, we’re here. For the first time since we began recording carbon dioxide levels in our atmosphere in the 1950’s, global CO2 levels surpassed 400 PPT for the entire month of March (we’ve recorded 400 PPM in the past, but for much shorter periods of time and only in localized areas.) The last time that the planet’s atmosphere contained this much carbon dioxide was over a million years ago, when modern humans didn’t exist.

“Reaching 400 PPM as a global average is a significant milestone,” said Pieter Tans, lead scientist at the National Oceanic and Atmospheric Administration (NOAA). “This marks the fact that humans burning fossil fuels have caused global carbon dioxide concentrations to rise more than 120 PPM since pre-industrial times. Half of that rise has occurred since 1980.”

Carbon emissions from human activity have contributed to a 5% increase in atmospheric moisture, which has translated into greater climate instability and extreme weather events. If we maintain our status quo, scientists predict that global temperature will increase 4-5 degrees, which would, according to Middlebury professor Bill McKibben, “almost certainly take down our civilization.” McKibben also claims that by passing the 400 PPM threshold, we’ve “crossed a barrier that irreversibly changes life as we know it.”

While it’s highly unlikely that the zombie apocalypse will happen tomorrow because we’ve hit the 400 PPM milestone, it’s certainly a wakeup call about how much impact we do actually have on the planet.

Let’s hope that the world leaders preparing climate action plans for the UN Climate Summit in Paris in December understand the urgent necessity of developing a decisive global agreement that marks a significant departure from the past, because what we need is a drastic decarbonization of the global economy—and quickly.

Unfortunately, NOAA scientists estimate that the elimination of 80% of today’s fossil fuel emissions would only cause carbon dioxide levels to plateau, and that we’d need even deeper reductions to actually see a meaningful decrease in global emissions.

With all of these dire scientific predictions, I can’t help but wonder—have we hit a climate rubicon?

How do you think we can most effectively claw our way back from the shores of destruction? Write to me at sara.gutterman@greenbuildermedia.com or follow me on Twitter or Facebook.