At CES, the company is promoting Alexa-enabled faucets, vanity mirrors and water guzzling showers over performance and efficiency. 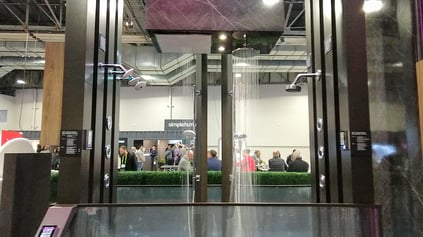 Perhaps I expect too much. But in the more than two decades I’ve been attending trade shows and writing about building products, Kohler has consistently been one of the good guys. They always seemed to be making forward strides to reduce water waste, educate the public about conservation, and tighten up their vast manufacturing facilities.

But when I was whisked through the Kohler booth at CES this week, I felt as though some trust fund kid had gotten hold of the Kohler playbook and rewritten the company’s mission statement after his third microbrew.

What puzzled me was why Kohler feels that we need to talk to ourselves in the bathroom. You can now get a high-end Numi toilet with integrated Alexa. You can also talk to your water guzzling, multi-head shower and even your vanity mirror now awaits your mundane queries and ramblings.

Kohler also added Alexa to their Sensate kitchen faucet. So now, instead of the split second it takes to normally activate the faucet with a gesture, you can fumble around in your head for the right words to turn the faucet on for exactly the amount of time you want.

“Why would you do that,” I asked the Kohler rep at the show. “Can you disable the Alexa feature?”

“That’s the beauty of it,” he explained, “you can choose to use it or not use it. It’s totally up to the user.”

Isn’t that a given? I guess if a homeowner was disabled, or an amputee, voice controlled kitchen faucets might make sense. But why integrate Alexa into the bathroom?

“Why couldn’t I just stick an Amazon Echo in the bathroom and achieve the same thing?” I asked.

“You could,” he acknowledged, “But we’re saving space on the sink countertop--and we’ve made it more water resistant. “Also, the research shows that 80-something percent of people take their phone into the bathroom with them,” he explained. “What we’re hoping is that people will no longer bring their phones into the bathroom, since now they’ve got Alexa. And we know that 13 percent of households are using voice control.”

There’s no argument that voice control of technology has appropriate and valuable uses--as a tool for elderly homeowners, for example--but the verdict is still out whether it will or should become ubiquitous in our homes. 13 percent is not a ringing endorsement.

More importantly in the Kohler example are their assumptions about behavior and how we interact with technology. Can’t we assume people take their phone into the bathroom to sit on the john and read the newspaper, check their Facebook, or Instagram? How will Alexa replace that? This seems like cracked logic, or perhaps just wishful thinking.

My biggest disappoint with Kohler, however, is not with silly and superficial integration of Alexa with these luxury products. The rich have ever been a fickle and superficial lot. But simply because we can pamper them with wasteful technology doesn’t mean we should.

Why roll out a multi-head shower system that has been around for years, at a time when much of the country is struggling with drought and water quality issues? What these systems do is comply with plumbing codes in word--but not in deed. Each shower head may deliver 2.5 gpm (or less), but running multiple heads once can put you in the 10 gallon per minute range. Take a ten minute shower and you’ve wasted 100 gallons of water. What a tragic rollback in water efficiency for a company that excels in producing low-flow toilets.

When historians 100 years from now (if any of them survive the extreme climate shifts that are coming), look back at this time, they may reach the conclusion that our obsession with comfort is what ultimately destroyed our ability to survive. Instead of talking to our mirrors and faucets, how about taking a few pointers from Moen, with its water saving smart shower and Flo leak detection?

Come on Kohler. Appealing to the narcissism of the rich isn’t doing the planet any favors. You can do better.