WHEN WE ENVISION HOW WE WILL LIVE OVER THE NEXT 100 YEARS, we are faced almost immediately with issues of food security. How do we design a building, a city, a house or a kitchen—or even a cooking method—without factoring in where and how people will acquire and prepare their food?

According to most statistics, hunger should no longer exist on Earth. Technological advances in farming mean that the total amount of food production worldwide now outpaces population growth. Yet almost a billion people go hungry each year. The reasons why, according to Harpers Magazine, are not what you might expect: Food has become a speculative commodity—especially wheat—that is bought and sold for profit, even when it doesn’t actually exist. Real food is held back until prices rise, and people starve

The U.S., on the other hand, has a different problem: obesity. While other parts of the world starve, 35% of our population is overweight. The problem isn’t just an excess of supply—supermarkets glutted with thousands of boutique items from far-flung corners of the world—it’s also in the poor quality of our heavily subsidized foods. Plants farmed conventionally depend on heavy doses of fertilizers, fungicides and herbicides, and are typically shipped hundreds of miles. By the time they hit the dinner table, they may contain only a fraction of the nutritional value of locally farmed, heritage plants (see chart).

As we try to predict the future of food security, these issues make it clear that our current food system is unsustainable. It may be cheap and fast, but it’s also out of control.

Although U.S. citizens, on average, spend only 10 to 12 percent of their income on food (compared with 40 or 50 percent in places such as the Middle East), the hidden costs are much higher. We’re sick more often, and exposed to more pollution in our fresh water and in our food. We waste precious water on inefficient irrigation, and our health care costs are among the highest per capita in the world. Yet we don’t tend to live any longer than people in places who spend much less. The Office of Medicare & Medicaid Services predicts that healthcare costs in the U.S. will double by 2022. 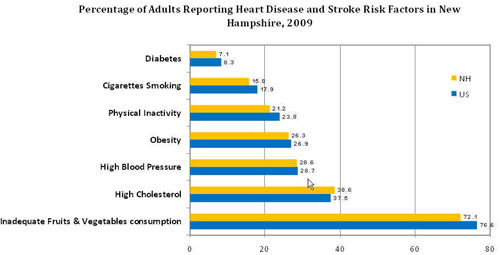 EAT YOUR BROCCOLI. The leading cause of heart disease and stroke in the U.S.— outpacing cigarette smoking, obesity and diabetes—is “inadequate consumption of fruits and vegetables.”

It’s simply costing too much in resources and environmental damage to maintain our current food system: transporting inferior foods vast distances, and shopping at gigantic retail outlets that constantly hammer prices down (resulting in lower quality produce). Wal-Mart, for example, now sells almost a third of the nation’s food. When box stores and factory farms link arms to bring prices to their absolute rock bottom, you can bet that the real costs—to the environment and public health—are not being counted.

Factory farms seem to have a monolithic hold on the American diet. But the signs of structural stress are beginning to show (see below). Our history includes a long list of “has-been” industries that seemed invulnerable before the sea of time swept them away or shrank their magnitude. Look at the railroad industry, the steel industry, the ship-building industry, and most recently, the nuclear power industry

"What we are seeing today is nothing less than the rapid-fire downsizing of nuclear power in the United States,” notes economist Marc Cooper of the Vermont Law School’s Institute for Energy and the Environment. “It is important to recognize that the tough times the U.S. nuclear power industry faces today are only going to get worse.”

It’s no secret that big biotech firms see our food future as one that is largely created in laboratories: Their ideal scenario, says Rifkin, would be to break all food material down into a bioengineered cellular paste that could then be manipulated to resemble foods we know. Kurzweil says that by 2049, we’ll all be living on “nano-produced food” [made with tiny robots], which has the correct nutritional composition and the same taste and texture of organically produced food. Does that mean the kitchen of the future will contain just one primary appliance—a 3D printer?

That biotech dream scenario would see food being sold as raw cellular material, making price the only differentiator. Food would truly become a commodity that could be produced in any country (lowest price wins, of course), barely regulated, and the consumer (i.e. human being) will never know the difference.

Set aside the “yuck factor” this is likely to stir in the average person. Will we embrace such technology, simply because the genie is out of the bottle? Is nano-engineered food “inevitable,” as many futurists believe?

The late, brilliant George Basalla, who wrote The Evolution of Technology, would say “no.” I spoke with him about this idea a few years ago. We discussed the reasons that some technologies become mainstream and others fade away. His lifelong research showed that the adoption of new technology is NOT inevitable simply because it exists, nor because it might be necessary for survival. Human beings tend to think more creatively than that. They crave diversity and novelty.

“The history of technology is not a record of artifacts fashioned to ensure our survival,” he wrote. “Instead, it is a testimony to the fertility of the contriving mind, and to the multitudinous ways the people of the Earth have chosen to live. Seen in this light, artifactual diversity is one of the highest expressions of human existence.”

What The Turnaround on Nukes Can Teach Us

Back to the nuclear power industry. After the Chernobyl disaster, Germany’s Green Party surged out of nowhere, making that country a solar powerhouse that has banned nukes. And Fukushima’s ripple effect is now having a similar effect on the U.S. The nuclear power industry here is in a state of near collapse, according to some experts.

What’s the takeaway for the future of food? All it takes is a couple of highly publicized “scares” to cause the public to do a complete about-face on technology. Will the scare take the form of tainted meat from factory farms, or a deadly sickness that can’t be cured with current antibiotics? Or perhaps as epidemic cancer or diabetes from genetically modified foods that were never tested for long-term consumption.

At present, most Americans are completely dependent on the factory farm system for their food. Even states once known for their farms are shadows of what they were. Farmland in the past 10 years in the U.S. has declined by 7.5 million acres. Soils are used more aggressively, ever more dependent on petroleum-based fertilizers, pesticides, fungicides and herbicides. However, with greater understanding of these "externalities" will come greater resistance to a factory-farmed future.

AS VERMONT GOES. A ranking called the Locavore Index identifies which states offer the most local food sources, based on the number of CSAs and farmers markets. Vermont ranks first (Texas is last), with the number of farms having risen 15 percent over five years ago.

Our Celestia Forecast for the Year 2100

The future of food security in the U.S. will ultimately be decided by the public. To put it in Star Wars terms, if big agribusiness is the all-powerful empire, the rebel force is everybody else: permaculturists, farmers, state governments, millennials, foodies, parents, preppers and everybody who cares about their health, or the health of people they care about.

We’re betting on the rebels.

If novelty and diversity are the cornerstones of innovation, in our view, high tech approaches to our food futures won’t go away. But instead of using them to create food, why not put them to work restoring the damage we’ve already done—making it possible to produce safe, healthy food? This future will be easier to achieve in the U.S. than in other, hard-pressed regions with depleted soils and fewer resources. No doubt, bio-tech firms will find willing buyers, the same way cigarette dealers have moved their operations overseas. Freed from the anxieties of food insecurity, perhaps our example here in the U.S. will inspire other nations to seek more holistic solutions, and slowly, ever so slowly, the dream of abundance will become reality for all nations. ###