Wes Jackson, sustainable agriculture expert and founder of The Land Institute, builds cathedrals. Not the kind that are made of stone, with flying buttresses, soaring arches, and elaborate cherub covered domes. His cathedrals are composed of rich soils, grasses that dance gently in the breeze, and thriving symbiotic ecosystems. His cathedrals venerate nature, where every living creature is a perfect embodiment of enlightenment.

In a recent interview on Green Builder Media’s Impact Series: Game Changers in Sustainability program, Jackson said “the plow has destroyed more options for future generations than the sword.” Simply put, the erosion caused by industrial agricultural practices are depleting our soils, sweeping essential nutrients and chemicals into the sea, creating extensive dead zones, and negatively affecting our ability to maintain fertile fields that can produce enough food to meet our ever growing needs.

Through his work at The Land Institute, Jackson studies nature to develop sustainable solutions that address the problems created by industrialized agricultural practices. He is 20 years into a 100-year plan to organically breed plants that are resistant to pathogens, weeds, and pests. It’s long, painstaking work, and it takes years to yield results. “There is no instant gratification here,” he says, “but if you’re working on something that you can finish in your lifetime, you’re not thinking big enough.”

After a full career dedicated to exploring natural ecosystems, Jackson is a consummate realist. “I’m not a climatologist, but I accept that climate change is a reality. Our fertile growing regions are becoming hotter and dryer. While we’re making some progress towards reducing soil erosion with advancements in farming practices (like minimum-till and no-till approaches), those gains are diminished and even completely eradicated by the pollution and depletion of our precious waterways and aquifers.”

Jackson is particularly worried about the Ogallala Aquifer, located beneath the Great Plains. One of the world’s largest aquifers, the Ogallala underlies eight states (South Dakota, Nebraska, Wyoming, Colorado, Kansas, Oklahoma, New Mexico, and Texas). The aquifer provides irrigation water for approximately 30% of the irrigated land in the U.S., supplies 82% of the drinking water in the Midwest, and supports $20 billion in agriculture.

Industrialized agriculture is both polluting and depleting the indispensable Ogallala Aquifer. Certain zones are completely empty, and while groundwater is a renewable resource, reserves replenish slowly—it’s estimated that the depleted areas of the Ogallala will take 100,000 years to refill (and that’s only if we were to drastically reduce our water consumption today.) Given our current usage rates, estimates indicate that the remaining water reserves could be completely exhausted as soon as 2028.

With all of the mining, fracking, and chemicals used in “big ag”, pollution is another imposing threat to the pristine Ogallala Aquifer. What are the implications of a polluted aquifer to farms and communities? It could be a matter of life and death.

Another sustainability activist, Bill McKibben, is zealously asking this question and expressing his acute concern about the future of the Ogallala Aquifer. Author, professor, and founder of environmental action group 350.org, McKibben is a pivotal leader in the movement opposing the Keystone XL pipeline project. 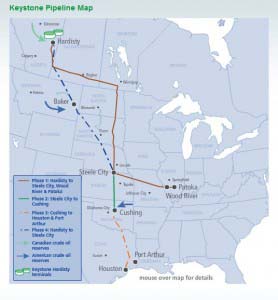 In 2008, the TransCanada Corporation proposed the construction of the Keystone XL pipeline (“XL” stands for eXport Limited”)—over 1,100 miles of pipeline to carry 850,000 barrels of oil per day from Western Canada to the U.S. Gulf Coast, where the oil would be processed and then shipped overseas.

While portions of the pipeline are already completed, the bulk of the U.S. construction has been halted due to inadequate data regarding the environmental impact of the pipeline, including oil spill response plans, safety issues, and greenhouse gas concerns. Since the extraction of oil from the Canadian tar sands results in 17% higher greenhouse gas emissions when compared the extraction of other types of oil sources, the full exploitation of the tar sands is expected to add 60 parts per million of carbon dioxide to the atmosphere, increasing the total to 450PPM, which according to author Samuel Avery is “the likely threshold level at which critical climate feedback loops take effect and runaway global warming begins.”

Proponents of the Keystone XL pipeline claim that the pipeline will generate revenues and up to 9,000 jobs in the areas where the pipeline is installed, and they draw attention to changes that have been made to the original proposal in light of environmental concerns, including new proposed routes (which would minimize the impact on the Sand Hills in Nebraska and the Ogallala Aquifer) and a reduction in the overall length of the pipeline.

Critics avow that the inevitable environmental damage caused by the construction and ongoing use (with expected leakages) of the pipeline far outweigh any benefits that come from increased revenues or jobs, particularly since ongoing revenues would primarily go to the oil companies (not Mainstreet America) and the jobs would only be temporary during the construction phase. Furthermore, opponents point out that the pipeline will not increase U.S. energy independence since the majority of the oil will be shipped abroad for end use.

When it comes to the Keystone XL pipeline, McKibben claims that "around the world,the fossil-fuel industry is carrying out its last desperate attempt to avoid the arrival of renewable energy and to ensure the existence of its dirty fuels. They seem to be using their standard strategy: to act quickly and with a minimum amount of review before the opposition has time to organize and bring out the truth."

At the end of the day, the future of our planet, and all of the precious species on it, might just hang in the balance of the things that keep Wes Jackson and Bill McKibben up at night—destructive industrial farming practices, the preservation of the Ogallala Aquifer, and the construction of the Keystone Pipeline (in 2011, NASA scientist James Hansen said that “the construction of the Keystone pipeline would mean game over for the planet.”)

As my head spins with all of the possible strategies and outcomes, I can’t help asking: how do we shift from constructing pipelines to erecting cathedrals? Why aren’t we studying the logic and wisdom of nature to develop solutions that will last lifetimes and serve future generations, rather than clinging to vestiges of the past that ultimately lead to the desecration of all that we hold sacred— our prairies, our waterways, our planet? And why is it so difficult for us to tell the difference?