In most homes, domestic hot water generation for bathing, showers, and cleaning, is typically the second largest user of energy following space heating and cooling. In Central Florida, the only modification to that equation is that space cooling alone is typically the largest load, followed by hot water. In designing and building an advanced energy efficient home like the Vision House® Orlando ‘11, that equation is altered yet again. Because the home’s thermal envelope is so effective in reducing the heating and cooling loads and because the HVAC systems are so efficient at meeting the remaining loads, the hot water energy load then becomes the most apparent issue.

To put the need into perspective, consider a comparable home built to code-minimum. Domestic hot water would use 14.9 MMBTU’s on an annual basis out of the homes 83.6 MMBTU’s total consumption (according to EnergyGaugeUSA). But when measured against the as-built VISION House, with a total annual energy consumption of 39.7 MMBTU’s, the share of energy use for hot water reaches nearly 40% of the total consumption. 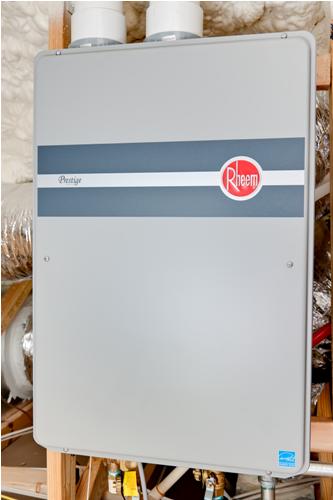 If we are serious about being energy-efficient and sustainable, something needs to be done to address hot water. In Central Florida, it’s logical to involve the sun in this solution. Enter Rheem®, and the SolPak active solar water heating system. The Rheem closed-loop glycol system was selected for its relative simplicity and large capacity. Being glycol based, no other provision for freezing weather needs to be considered (such as active drain-down with additional drain-down storage tanks). And unlike passive integral-collector-storage (ICS) systems, hot water is available for use any time of the day including high-use times such as the early morning.

Based on the VISION House’s occupancy, orientation and location the Rheem® Solpak system is predicted to cover an impressive 90% or more of the homes total hot water generation.