Designing and building homes able to approach net-zero-energy first requires that overall energy use be reduced as much as practical. Determining major energy loads is the first step in developing a strategy to reduce those loads both practically and cost-effectively. In the hot-dry climate of Las Vegas, summer-time cooling most often represents the most significant energy use, and therefore reducing it is a top priority. 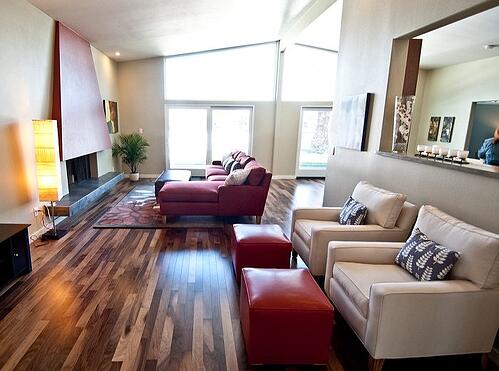 In defending against solar heat gain, the performance of windows is usually the weak link and needs to be aggressively addressed. Adding to the significance of the windows is that the ReVISION House Vegas has, consistent with its architectural form, a good deal of glass - much of it facing west, and all of it single glazed, clear glass in aluminum frames. With this as a backdrop, the project team decided to take a two-prong approach: Replace the windows and patios doors with dramatically higher performing glazing; and strategically reduce the size of windows or eliminate them altogether where natural light and other benefits would not be diminished.

The existing design of the home places the majority of glass facing east (from the open living space to the rear yard and pool), and to the west from the master bedroom overlooking the street in front. This includes clerestory glass trapezoids in the front and rear gables. Since the west facing clerestory windows serve the front bedroom only and are augmented by large operable sliders in that same room, the decision was made to eliminate them entirely filling the voids to match the upgraded wall assembly. Where the glazing was removed, the exterior is also treated aesthetically with dark, contrasting panels to mimic the original look of the glass elements. It is interesting to note that the solar heat gain and glare from the original singled-glazed clerestory glass was so onerous that the prior owner had painted them white, in an attempt to control comfort and glare problems. In the two south facing bedrooms, the original floor-length windows were reduced in height to terminate 18” above the floor, allowing the roof overhang to provide mid-day summer shading.

Because the window configurations are such a significant contributor to the home’s design, both in area and in appearance, the design team did not want to reduce the amount of glazing beyond the west facing bedroom, and therefore needed exceptional window performance to meet the aggressive energy goals. Working with Milgard Windows & Doors, the project team selected the ULTRA ™ Series fiberglass windows and patio doors with triple glazing, warm edge spacers, and argon. By substituting the original glass with the Milgard ULTRA™ units, the U-value of the windows improves from 1.11 to 0.22, and the solar-heat-gain-coefficient (SHGC) improves from 0.86 to 0.19. This amounts to a 500% improvement in the glasses’ ability to block solar gain, and conductive heat loss. The fiberglass frames offer additional benefits including thinner profiles in keeping with the 1960’s aesthetic, and less thermal expansion and contraction than either aluminum or vinyl.

Pre-retrofit testing showed that air-leakage around the window frames was significant as was air leakage between the glass and glazing stops in the fixed panels. With the new Milgard units these leaks , as well as the periodic water leaks at some of those same locations, are virtually eliminated.

Replacing the existing obsolete windows with high performing Milgard ULTRA™ triple glazed units is a critical ingredient in approaching net-zero whole house performance for the ReVision House, and on its own contributes up to 20% of the overall energy savings.