Most people know that low flush toilets – those that use 1.6 gallons per flush or less – have, by law, been the only type available since 1992. But how many realize that there are still about 100 million older toilets in place that use 3.5 gallons, or more? If each of those are flushed just four times per day, that’s close to 300 billion extra gallons per year down the waste pipe.

That’s a lot of wasted water.

Kohler is taking steps to drastically reduce that number. Of course that’s not surprising for the premier manufacturer of water-efficient plumbing fixtures, but Kohler’s commitment to water conservation goes beyond making great products. It is also putting considerable resources toward educating the public, and the trades. 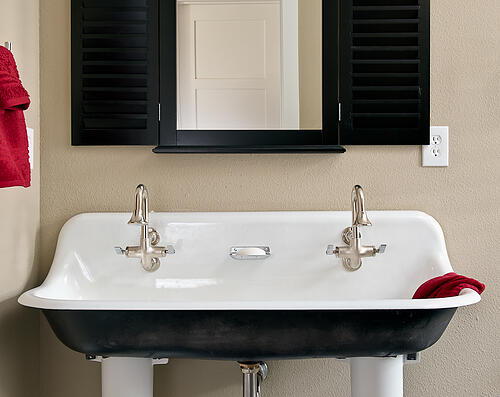 At the lead of this effort is Kohler’s Save Water America program. The program’s interactive website, SaveWaterAmerica.com, includes information about water-saving products as well as a database of toilet rebate programs. These rebates, ranging from $25 to $150, encourage homeowners to buy water-saving toilets by offsetting the cost.

The program has also earned attention for its support of Habitat for Humanity. Since it’s launch in early 2009, Save Water America has donated over $2 million in free Kohler products to more than 1400 Habitat homes in 48 states. But while the goal of helping people achieve homeownership is important, the Habitat partnership is just one piece of a wider effort to raise water consciousness among average Americans, and to get them demanding water-saving fixtures.

As part of this effort, Kohler employees have been on the ground making a direct impact in local communities. Company experts have hosted events in cities across the country, where they showed homeowners and construction pros how easy it is to conserve water in the home – and how doing saves the homeowners money, while helping the community maintain a clean, healthy environment.

“Population growth will make water the big issue in the future,” says John Engberg, Kohler’s Communications Director-Research & Media. Unfortunately, it often takes a crisis to awaken people to this fact, as the residents of Atlanta found in 2007-2008, when a drought nearly caused the city’s reservoirs to run dry. But given the area’s 50% population growth between 1990-2007 that crisis was foreseeable, and preventable – had anyone been willing to face it. Cities that do face the problem have a different experience. For instance Las Vegas used 19 percent less water in 2008 than it did in 2001 despite a population that grew by nearly a half-million. The key was a strong water consciousness: everyone in Vegas knew there was a looming shortage, so the politicians and the population were motivated to take conservation seriously.

Ultimately, Save Water America’s goal is to help duplicate that level of water consciousness nationwide, and to encourage cities and towns to take steps to avoid a crisis. Kohler has decided that the best strategy is to start with two large states with ongoing water challenges: Texas and California. As the nation’s two most populous states, successful conservation measures taken there will likely get noticed nationwide.

In 2011, Kohler’s Save Water America initiative continues to outfit Habitat homes as it did in the last two, but those homes will be clustered in Texas and California. Kohler has created a water-saving, sustainable spec for those Habitat homes that includes a 1.28 gallon-per-flush Cimarron toilet, a 1.75 gallon-per-minute Forte showerhead, and a 1.5 gallon-per-minute Coralis bathroom faucet. These water-efficient fixtures and faucets will be paired with cast iron sinks and tubs made from recycled content.

A critical mass of Habitat homes in those regions should make news for their water savings, helping create demand in the wider community for more efficient fixtures. At the same time, the plumbers working on those homes will see the value of the water-saving spec to their other customers. “The plumbing trades are very involved in Habitat homes,” says Engberg. “By targeting the trades in a few areas we can plant a seed that helps spread the message to the entire region.”