Wifi gadgets can make you forget a stressful encounter at work, but they can dim the lights, cue the music, and remind you of the heavens.

Unless you’re 20, have no children, don’t drink coffee or wine, keep your weight down, and have a completely stress-free life, you’ve probably had trouble sleeping.

Insomnia seems to be a condition of modern life. There are many theories about why this is so. We have a whole new list of potential sleep disruptors:  Could it be the processed food in our diets? The pesticides? The electromagnetic fields (EMF) generated by our smartphones? How about the fact that two-thirds of us are overweight, a direct route to sleep apnea and other sleep wreckers? Then there’s the effect of looking at video screens all day.

Where do we begin to take back the night? 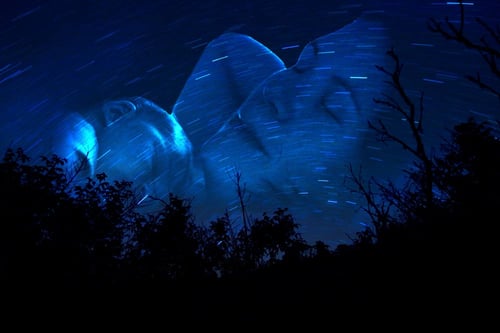 Let’s start with the basics. First, accept the fact that ALL of these factors may contribute to our insomnia. But we’re also not the first generation to complain of restless sleep. According to At Day’s Close: Night in Times Past, people in the Middle Ages considered it normal to wake in the middle of the night and sleep in two distinct phases. The advice of that era was to read a book, take a walk, or have sex--then go back to sleep.

Medical researchers have spent decades studying sleep patterns and impediments. So we do know a thing or two about how and why people sleep poorly, or wake up frequently. To crudely aggregate their years of hard work, it often comes down to the most obvious factors: stress, light (especially blue light), bad air, noise and discomfort.

Here’s where technology does have its applications. While researching sleep aids for our Flex House exhibition project at CES in January, we looked first at the biggest sleep killers, then identified potential solutions. Here’s what we came up with. First I’ll describe the rationale, then how the whole system works together.

Motorized Blind. LAN (light at night) is the enemy of good sleep. Our pineal glands produce melatonin only when it’s truly dark in the room, and most rooms are not dark enough. We need the melatonin to lower our body temperature, and reduce our blood pressure while we sleep, and to keep us sleeping. Most bedrooms are not dark enough. So we installed a set of Lutron Serena motorized shades.

Ambient Timed Music. The right type of music has been shown to improve sleep, especially in older people. Best are new age and classical tracks without an easily tracked melody. We programmed a Sonos speaker to play “Weightless,” a song  considered the most relaxing of all, as our first track, but as Van Winkles, a website about sleep, points out, you need to listen for about 45 minutes to really become relaxed. So the Sonos plays several relaxing tracks, then winds down and shuts off after an hour.

Starry Sky. A starlit sky is one of the least disruptive forms of “natural” light our brains can handle before sleep. Too many people spend their pre-sleep minutes looking at blue screens, one of the worst disruptors of melatonin production. We found a neat little constellation projector, hooked it up to a Wemo smart plug, thinking that by giving them a calming, slow moving and non-disruptive canopy of stars to watch instead, they could quiet their minds without trashing sleep by looking at their Facebook likes and dislikes.

Air Control. Studies have shown that lower CO2 levels lead to better sleep and less overtiredness the following day. The first step, however, is to monitor those levels. Only recently have affordable air quality monitors hit the market. We put in an Awair unit, which checks CO2, humidity and VOC levels and integrates with Alexa. So an automated routine can be put in place that tells an air purifier or fan to turn on when CO2 levels reach a certain level.

At the Flex House, we put all of these technologies into play in one room, and set up an Alexa routine to prepare the room for sleep. While we could simply put it on a timer, we instead made it voice-activated, so that when you walk into the room and say “Alexa, Show me the stars,” the lights dim, the Awair unit checks the air quality, motorized blinds descend and darken the windows, and the Wemo turns on the constellation projector, which shines dimly on the ceiling. Ambient music plays as you get ready for bed, and eventually shuts off, along with the starry night, as you settle into deep slumber in total darkness.

You can see the Flex House in person at CES in January. You’ll also be able to take a video or audio tour of the home anytime.