OVER THE YEARS, I have always enjoyed learning about the building of the great cathedrals through accounts provided by a variety of sources, from historical novels to television documentaries. The stories of soaring imagination and vision, amazing engineering and unbelievable physical exertion must thrill and inspire anyone who has any kind of role in the art and science of building.

But the common element of these stories that most amazes me, that gives me goose bumps when I think about it, is in the realization that because of the enormous scale and complexity of these structures, as well as the limited technology available to the builders of that era, it literally took decades—even generations—to complete them.

Think about the ramifications of that. It means that all of those involved, from architects, designers and engineers to supervisors, tradesmen and basic laborers (some of whom were admittedly not volunteers), might toil for their entire working lives on a single project, knowing that there was no hope of seeing it through to completion in their lifetimes. 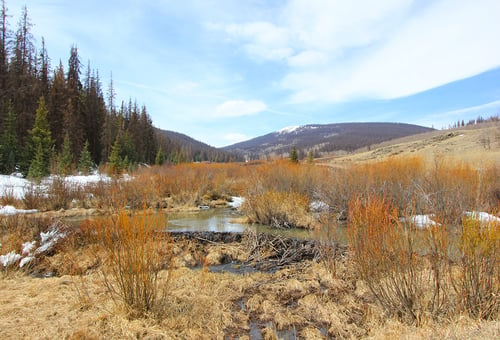 This seems to be a concept that would escape comprehension by most of us who call ourselves builders today. In this 21st-century world of technology and automation, we find ourselves in roles of serving the demands of instant gratification, rather than creating monuments for the ages. Few of us will ever experience that privilege, at least not in the literal sense.

Yet, it may be at least metaphorically possible, if we allow ourselves to look beyond the self-imposed boundaries of how we think about what we do. Let me explain:

The high-elevation evergreen forests surrounding our Mariposa Meadows project have been essentially decimated in a shockingly few short years, when the bark beetle that has existed naturally with varieties of trees (in this case Englemann spruce) experienced population explosions due to milder winters—one consequence of climate change that the trees in these vast forests, which were already weakened by prolonged drought, could no longer withstand.

The results, here and throughout the forests of western North America, are millions of acres of dead-standing timber that not only represent the loss of living vegetation, habitat for innumerable species, protection against erosion and other benefits, but which have exacerbated the risk of massive wildfires beyond our worst fears.

In our little corner of the Rockies, this heartbreaking situation is at least being addressed by logging the dead forests to harvest the dead-standing timber while it still has commercial value. The logging contracts between private-sector companies and the U.S. Forest Service, an option viewed by many as too little too late, nonetheless do allow for use of the timber resource as well as a reduction in fire danger. Each of the dozen or so loaded logging trucks that roar down the state highway through our little community every day carries with it many board feet of lumber, but also a great deal of potential destruction.

What I have come to realize in this scenario is that I have been given a choice in how I deal with this sad and unwanted reality. Unable to undo the effects of climate change and other factors, I can dwell in a place of anger, frustration and resentment, or I can walk among the slash piles and newly exposed areas of the forest floor, where the baby trees are already reaching for the light. I can do my part to ensure, even though I won’t be around to see the day, that they are given the chance to become cathedrals, soaring again into the clouds.