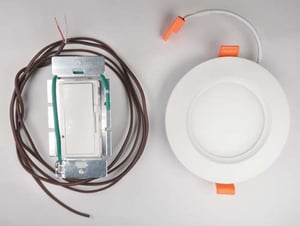 LED lighting is a standard in housing now, but it is by no means perfect. ATX-LED offers a more-efficient, affordable and smarter alternative using DC power instead of the traditional 120 volt AC.

Every standard LED bulb has a converter that changes the incoming AC into low-voltage DC for the LEDs to operate. This tends to be a failure point; when these bulbs are placed into a ceiling fixture, the AC to DC converter heats to more than 140 degrees Fahrenheit. This leads to early failures of the bulb. ATX-LED DC lighting, which runs at 48V, prevents the heat buildup, which helps the bulb achieve closer to its expected 10-year lifespan.

ATX’s LED lights can be operated with a dimmer; every ATX-LED dimmer is smart and be controlled via voice or mobile app. Lighting schedules can be set. Meanwhile, ATX-LED’s wafer LED lighting is a half-inch thin and mounts directly into the ceiling sitting flush—no need for any metal “cans” in the ceiling. And, 48V DC requires 18-gauge, two-wire copper security wire, down from three 12-gauge for 120V AC. That’s less copper, less waste.