The authors found that certain metals affect men and women differently, but the effects range from bad to horrific.

The risk of dying from cancer is not the same in all geographic regions (of Spain--shown). There are many factors that influence, including the type of soil, since it can harbor heavy metals and semimetals that are carcinogenic for humans. The chronic exposure of a population to these toxic elements, which enter the body through the food chain and food, could increase the frequency of certain tumors in some territories. 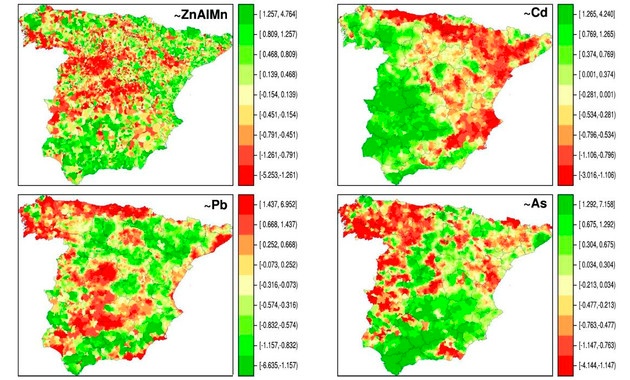 In this context, researchers from the National Epidemiology Center of the Carlos III Health Institute (ISCIII) and the Geological and Mining Institute of Spain (IGME) have jointly assessed the possible statistical association between the concentrations of heavy metals in the soil and mortality by different cancer types. The results have been published in the open access journals Environmental Geochemistry and Health and Environmental Science and Pollution Research International.

The data has been extracted from the Spain´s Geochemical Atlas, published by the IGME in 2012, as well as from a database with 861,440 deaths from 27 cancer types that occurred in almost 8,000 Spanish municipalities between 1999 and 2008. The data can be extrapolated to the present because the geochemical composition of the soil is stable and the mortality patterns for this disease usually do not vary.

"We have also detected that the highest of cadmium, lead, zinc, manganese and copper concentrations in the soil are statistically associated with a higher mortality due to cancers of the digestive system in men," explains Pablo Fernández, ISCIII researcher and co-author of the paper, "and in the case of women, a higher mortality from brain cancer in those areas with more cadmium content”.


The results also show a relationship between soils with more cadmium and higher mortality from bladder cancer; as well as lands with high concentrations of arsenic and more cases of death from brain tumors.

"This research suggests that the geochemical composition of the soil, especially its metals, could be influencing the spatial distribution and mortality patterns of cancer in Spain, regardless of the socio-demographic context," says Fernández, who highlights "the great contribution of this work to environmental epidemiology and public health in general”.